Wow, what a week in immigration.

Last week Matthew and I talked about Donald Trump and how his whole existence teeters between “depressing” and “hilarious.” I’ve decided to quantify this with an official DONALD SCALE (TM): 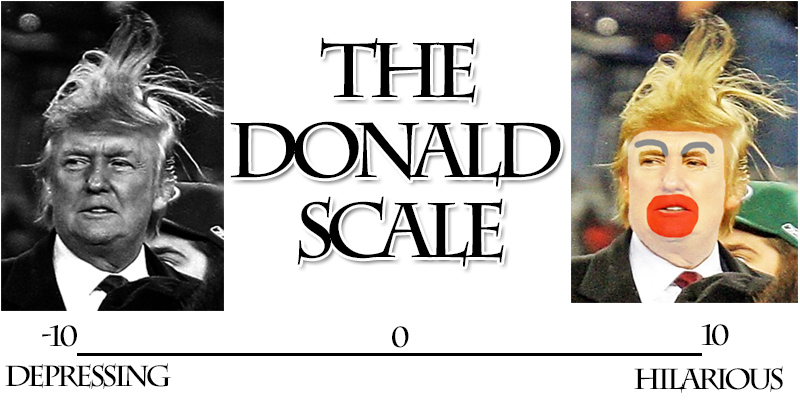 For example, when I’m driving to work and I hear people in my community call the local AM talk radio station to talk about how Donald Trump has “tapped in to something important,” and that he’s “in touch with the real” America, that’s a -8 on the Donald Scale. Very, very depressing.

When Donald Trump gives out Lindsay Graham’s telephone number at a fundraiser, well, that’s Donald being a straight up 10.


But it’s not all fun and games. According to the polls Donald Trump is squarely in 1st place for the Republican nomination. He got there by running a fear-based, anti-immigrant campaign. This last week he went down to the border, wore a terrible hat, and continued to promote his super-awesome TRUMP WALL (TM).

But it’s not all bad news. Yesterday a Federal District Court Judge delivered a major blow to the Administration’s family detention policies. This should be good news for Matthew and all this liberal, hippy friends who think “detaining” “women” and “children” is a “bad idea.”

Speaking of Matthew, he won a big case yesterday and you should all congratulate him. For real. Nice work.

Last week Democratic presidential candidates Martin O’Malley and Bernie Sanders were shouted down by Black Lives Matter activists. My feelings on this have evolved over the last few days. At first I felt like the criticism of the candidates (especially Bernie Sanders) was a bit unfair, and as progressives we should be careful about division amongst our ranks.

But what was the outcome here? O’Malley, Sanders, and even Clinton immediately began talking about Black Lives Matter. So it worked. They were compelled to respond to the controversy surrounding the arrest and death of Sandra Bland. These politicians do not answer to these issues unless we absolutely force them to. So much respect to Black Lives Matter, an important movement at an important time.