The American Immigration Lawyers Association, AILA, invited Cecilia Munoz to be our keynote speaker at our annual convention. I just noticed I wrote “our” but there is good reason for it. I am a part of AILA and have held the organization in somewhat high esteem, especially lately due in large part to our members inspiring work to not only represent the families victimized by the Obama administration by their immoral family detention policy, but at our work in trying to end the practice all together. My admiration for our organization has taken a big hit with the announcement that Cecilia Munoz will be our keynote speaker at our largest event of the year.

Don’t know who Cecilia Munoz is? Read the announcement of her speech off of the AILA website: 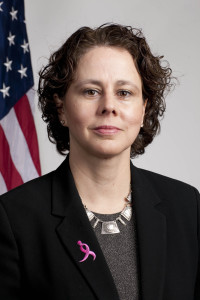 The Honorable Cecilia Muñoz will deliver the keynote address at the June 17-20 Annual Conference on Immigration Law. Ms. Muñoz is the Assistant to the President and Director of the Domestic Policy Council.

Prior to her current position, Ms. Muñoz served as Deputy Assistant to the President and Director of Intergovernmental Affairs, where she oversaw the Obama administration’s relationships with state and local governments.

Before joining the Obama administration, Ms. Muñoz served as Senior Vice President for the Office of Research, Advocacy, and Legislation at the National Council of La Raza (NCLR), the nation’s largest Latino civil rights organization. She supervised NCLR’s policy staff covering a variety of issues of importance to the Latino community, including civil rights, employment, poverty, farmworker issues, education, health, housing, and immigration. Her particular area of expertise is immigration policy, which she covered at NCLR for 20 years.

Wow! That sounds great! Now, listen to this:

Yea….what the f…..? Let me break it down for the one non-immigration lawyer who may be reading (thanks, Mom!). Munoz is pushing out a few false narratives here. First is that these refugees we saw flooding the border last summer from Central America had no claims for asylum or other humanitarian relief and would simply lose their cases and be sent back. These refugees are winning, in large part to AILA’s efforts (listen to our last podcast with Stephen Manning). We are winning these cases and Ms. Munoz’s claims on this point was both wrong and extremely prejudicial.

Second, she is trying to scare people by stating that we only see the kids who survive. Yes, it’s a dangerous journey, but let’s not pretend that it’s something it is not. Munoz’s words are intended to convey a more grave situation of danger than actually exists so she can justify the administration’s actions. This is actually kind of sick, if you ask me, especially when you witness the way the administration treats the refugees once they are here.

Other than the false narratives Munoz is pushing, she articulates the goal of deterrence of future refugees by attempting to deport them as quickly as possible. She believes this is the proper way to address this so called problem. The administration’s position is that the problem is that the refugees are showing up here on our soil and not that root problem that caused them to leave their countries in the first place. The problem is optics and not the human cost.

This brings me to the most offensive thing about this video and that is Andrea Mitchell. It is no secret that Andrea Mitchell is a liberal who cheer leads for Democratic causes and this White House. Her problem with the whole situation is that Obama did not act quickly enough and now the whole thing looks bad. It’s bad optics she says more than once. Mitchell is not concerned with the refugees and their human struggle; she is concerned that Obama is looking bad. The optics of poor women and children crowded in the hierelas pulled at Mitchell’s heart strings, but she was feeling sad for Obama. She thought, “Geesh, this makes him look bad. Why isn’t he just deporting them and getting them out of here? Clean up this mess.” At least Glenn Beck went down there and gave them teddy bears and soccer balls.

AILA announced the appearance of Munoz under the banner of “Late Breaking News” indicating the decision was recently made, which would have been well after we all knew of the despicable way the Obama administration was treating these refugees from Central America, including the children with Munoz being the main administration advocate on this issue. We don’t know who or how the decision was made because the only one from AILA to speak on this matter has been Crystal Williams, the Executive Director. She first claimed that AILA chose Munoz in order to be held accountable by our membership and just yesterday it was announced, that due to time constraints, Munoz would not be fielding any questions from our members. The accountability excuse was clear bullshit when it was first floated and confirmed by Williams recent announcement about no questions. At least Williams had the courage to address this issue, the Executive Committee hides and says nothing. They don’t want to risk getting the powers to be upset with them and who can blame them….oh yea, I can.

Crystal Williams encouraged everyone to attend and to wear buttons saying #EndFamilyDetention…because hash tags on buttons have proven to be the most effective form of civil disobedience, even more powerful then hunger strikes. #GhandiNeverHadAHashTagButton She also said we would all be polite. Well, I’m not going to be there but I encourage everyone not to be polite. Ms. Munoz does not deserve politeness. The optics may be bad for us if we are impolite, but when mothers and children are being tortured by this administration, manners should be suspended, optics be damned.